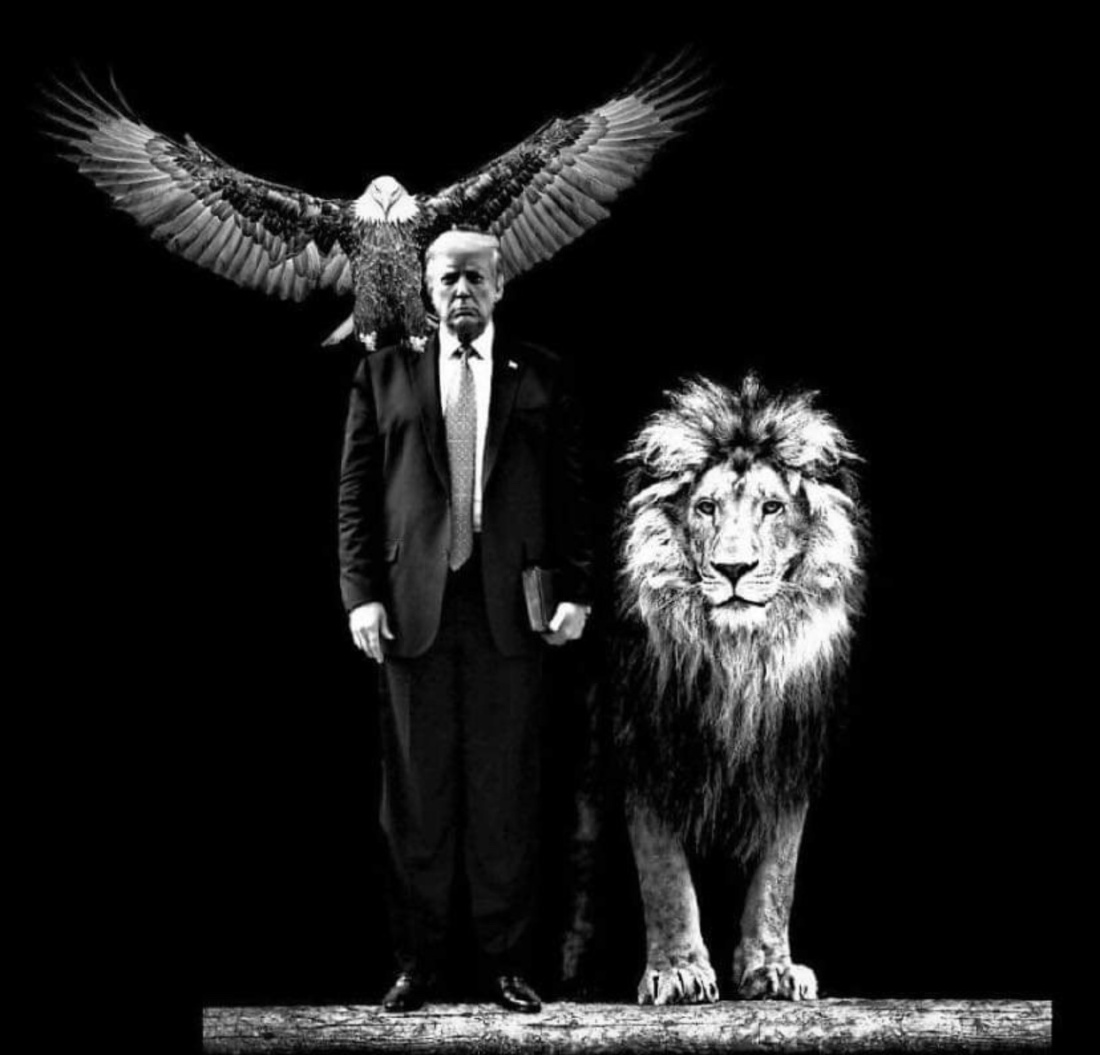 Nothing Can Stop What Is Coming

Waiting is never easy. Especially when we are waiting for the fate of humanity.

Especially when millions of us know that the election was stolen by a pedophile and the pedophile group of organized criminals who support him.

While we sit here and wait, almost helplessly it seems at times, we are all truly at the mercy of God. There is nothing we can do but wait and pray. To have patience during this time is surely a test for many. But God did not bring his children this far to abandon us now. He is working. He is with us. Trust in Him and Him only. Remember that He is working on bringing us from Dark to Light on His time, not ours.

I have a weird feeling that Potus is not coming back in the way that we are all expecting, meaning things will not go back to what we once knew as normal. Remember how Potus said before he left, that “we will be back in some form“? That form is in my opinion a new system of government. A republic.

Although March 4th is supposed to be a date that brings us some good news, no one likes disappointment. So don’t bank on anything. Yet, there is something significant about that very date. Here it is:

On March 4, 1789, the first Congress under the Constitution convened in New York City.

Perhaps this date in 2021 will mark the beginning of Restoration of The Republic. We can only hope and pray.

There are only two sides to this: good and evil. Everyone has already chosen their sides. Are the White Hats are waiting for everyone to wake up? As a friend pointed out to me last night, they won’t wake up. Why? Because their weak little brainwashed minds believe that Biden actually wont the election.

What Are You Going To Believe?

Honestly, I don’t think it is possible to wake up stupid. You can’t even shake these people awake. Their emotion based reasoning is truly beyond help. It’s like trying to shake the addiction out of a drug addict. Good luck with that.

What Will It Take? for these morons? It’s getting more and more difficult every day. I think we have all had enough of this already.

Unless, there is an event that forces them to awaken, we are not getting anywhere.

Nothing can stop what is coming.

What kind of event would it take for them to wake up? What do you think? We would love to hear your thoughts and comments. Think about this truly from the perspective of someone looking at this mess from not a pigeon’s standpoint, from from the eyes of an eagle. What do you see?

I’m almost afraid to say that even pedophelia is excusable to these idiots. I don’t think they give a rats ass what Biden has done. The media that they are plugged into, the matrix, is their world. They will never escape unless they get a rude awakening. It’s going to require some pain for them. And at this point, good. They need it.

Stay in faith. The Lord will keep us from all evil. Fear not!

A message from POTUS!

Thread via Donnie from https://t.me/QFrogman5326 on Telegram:

What does “(Y) What does it mean to be covered in gold?” Have in common with Iran according to Q Drops one might wonder. Where does Israel fit in?

A message from Lin Wood (https://t.me/linwoodspeakstruth) via Telegram:

How do we resolve our differences in an effort to turn chaos into order? Stated differently, how do we avoid a full-fledged civil war?

1. Respect the fact that while we have differences, we are more alike than we are different.

2. Focus on our similarities, not our differences.

4. Obey the laws as presently on the books. Work through the established system to change them if you believe change is necessary or desirable.

5. Study the Constitution and the Bill of Rights. These are the founding principles that brought divided states together then to become united states thereafter.

6. Acknowledge that we as a country and as its individual citizens are not perfect. After all, we agreed on our founding principles in order to form a “more perfect” union. We will never be perfect. We just do the best we can to try to be more perfect. So we ought to better understand each other.

7. It is called the Golden Rule for a reason. Because it is THE Golden Rule. Do unto others as you would have them do unto you.

We will have to engage in some give and take without sacrificing our common goals, objectives, and principles as a united country. That is called The Art of the Deal.

Even if you disagree with me, I hope that I have at least given you some things to seriously consider.

May God give us the strength, discipline and tenacity it takes to fight these forces of evil that want to destroy our Constitution, take our rights and turn us into obedient serfs.

I watched Tucker Carlson tonight and he had Naomi Wolf on who is a solid liberal. She’s terrified and women all across the United States, liberal and conservative, that she has interviewed are terrified. She said she’s studied tyrant takeovers of countries for the last twelve years and she knows there are ten steps that tyrants take when they want to close down a democracy. She said the last step, step ten, is the suspension of law. We are on step ten now. The government is regularly in violation of the First, Fourth, Fifth and Fourteenth Amendments and Biden boisterously declares he’s going to take away our Second Amendment rights. Given the make-up of the House and Senate right now, he may get away with it unless we stop him.

Let me reiterate, Naomi Wolf is a solid liberal.

If we are going to save this Country, we’re going to need to join with liberals as well as conservatives. As Naomi Wolf demonstrates, there are plenty of us in the middle, liberals and conservatives alike, that just want our Constitutional protections to work. There are Mom’s on both sides that want their kids to be able to go back to school and be safe. It makes no sense to defund the police and experience dramatically higher murder rates and then tell the public that they can’t have guns to defend themselves while the elites have armies of gun toting security to protect them.

It’s no wonder that liberals like Naomi Wolf are speaking up and saying the election of Joe Biden was a mistake. Naomi said that had she known Biden would lock down the Country again, she never would have voted for him. You can be sure she’s not alone.

To win, Democrats need to be our allies, remember that. Not the radical loud-mouthed ones you see on television and Twitter. We need to partner with the ones in the middle that believe most of what we do. There are plenty of them out there. We just don’t hear from them because they don’t want to identify and be the next victim of the cancel culture where they lose their livelihoods and have their reputations destroyed so they won’t be able to provide for their families for the foreseeable future.

If there are enough of us standing up for our rights in a highly visible way, they’ll join us.

To do that, we need a movement. Giant Slayers intends to be a part of that movement. We’re planning now to go after the strategic areas that will allow us to stop the Democrats in their tracks. Once again, may God give us the courage, purpose and conviction to succeed.

There is one more problem we need to solve. Conservatives don’t cooperate and work together very well either. If we don’t learn to work together as a team with a common purpose, we will die as individuals. We have to pull together as one solid movement or we will have trouble succeeding. As we move forward and grow, I pray that our success will help conservatives see that there is power in a movement and they’ll join us.

The situation is dire, but I also know that it is that fact that will spur millions to action to save our Country and our Constitution so that we can live in peace and safety and be able to make a comfortable living that allows us to help our children continue to carry the torch for their kids and future generations.

We will succeed because there are eighty million or more Americans that will not let us slip into Socialism and the totalitarian government that will follow.

We are part of the eighty million. Let’s all do our part as though the outcome of this battle depends on us alone. I assure you I and the leadership of Giant Slayers – @Politick_Rick,  @Jedi_Minion,  @JuliaRightView,  @BrianpatrickUSA – will do our part and I know you will too. ~ Politick_Rick

This is hilarious and sad:

From Crystal Jones, Operation Money Drop – a bunch of citizens walk maskless together to a Trader Joe’s in California and watch what happens:

Note to all visitors:
Please make sure to subscribe to this blog by scrolling to the bottom and clicking “Follow” where you will be prompted to enter your email address. This is a free service bought to you by patriots who don’t want your money for information. Those who do should be ashamed of themselves, as this is about true freedom and not their pocketbooks. Use discernment. God bless you and Godspeed! 🙏🏼 ♥️ 🇺🇸 ⚖️

NO MATTER WHAT, STAY THE COURSE. GOD IS WITH US. AMEN.