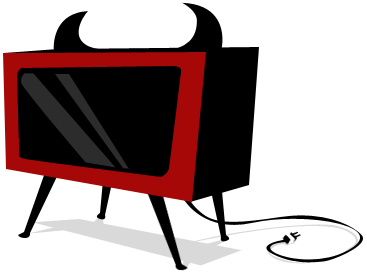 The Fable of Cable

Have you ever stopped to ask yourself who controls the media?

Do you really think that all that “programming” just happens without any intention or planning on its own?

The answer is always right before your eyes. 😱

For years, people like myself were at the mercy of The Media Cabal, watching only what was available at certain times on certain days. Our weeks and months revolved around Friday night Falcon Crest, after school Three’s Company reruns and a whole lot of Good Times, Believe It or Not, and the Facts of Life.

Who decides what your programming is?

It ain’t Mother Theresa or the Dali Lama, that’s for sure.

After living, working in and understanding the rapidly deteriorating entertainment industry in Hollywood, one comes to quickly realize that it’s a small group of self-serving not-so-nice greed mongers who want you to buy into their programming, their commercials and their fear-and-illness based materialism.

So why would anyone want to support or worse, choose to be influenced by these people and their agendas?

Before the answer was simple: we had television or we had nothing. Now, we have a world of REAL information at our fingertips with trending Twitter updates, social chatter, and the infinity of freedom on the Internet to broadcast more than just You on the “Tube”.

And of course, not all programming is bad. But there is bad in all programming. Even during your favorite sports event, or your favorite cooking show, there are commercials selling you stuff that can possibly kill you. In fact, most of it does kill you. Loaded with food coloring and chemicals, a lot of our food sources are the foundation of our illness-ridden society. And that’s not even touching the world of pharmaceuticals and the commercials which show people skipping gleefully through sunflower fields while a fast-talking voice at the end rushes you through some (not all!) of the possible side-effects. 😟

But all hope is not lost!

We are rapidly evolving into an informed society of information sharing. No longer are we willing to tolerate manipulation and brainwashing by a past racist media. The Grammys and the Oscars are becoming a fast-moving joke about who-the-f*ck cares about ratings and charts. Let the public audience speak for themselves in the day and age of instant messaging, selfies, and status updates. Heck, you can go all fancy pants out and even start your own blog ;).

We will see more content monetized and fueled by Creators and Artists versus the old, endangered model of cabalistic exploitation of the many by the few soul-hustlers that have, as of recently (and more-to-come) found themselves shit-out-of luck.

Our society is one where we have a collective responsibility that is realized and given life through our growing knowledge and faith in Truth: the freedom to be freed from shitty content laden with innumerable subtle yet in-your-face poisons.

So why are you still tuned into crappy programming? Are you not strong enough to say no to the mental boob tube drugs you’ve gotten used to? They are not addicting you know, and they disappear as soon as the switch goes off. But the effects of crap in your brain: that’s damaging. Did you know that every negative image you put in your brain ultimately plays a part in your demise? Don’t believe me? Read the Bible. Don’t read the Bible? Read any neuroscience  journal. Don’t like science or religion? Read about the health stats and lifespans of people who watch a lot of tv versus people don’t have cable (good luck finding this data). Don’t read? Well, that means you’re really screwed.

But ultimately, the answer is you. No one is putting a gun to your head and making you watch any of it. You are free to spend the dollars you have left that have NOT gone to the welfare and homeless people on your block, on that brand new flat screen from Costco and your local cable monopoly (notice how the word “cable” and “cabal”are separated only by one letter).

Either way, we are in a time of great change where the Internet has afforded freedom to choose your “programming” wisely (we hope). No longer are we at the mercy of single-source network TV, media and radio (yes, it’s all the same folks; they are all in it together which is why it’s called a “network”.) The meetings I go to in Hollywood are all about how the people in power losing control, grasping onto the sunken ropes of the cabalistic Titanic; a story which needs no narrative for the grande finale.

No longer are movies solely in the power of the old Giants. Although Silicon Valley is doing its damnedest to take a piece of your brain’s programming pie, at best, they will only become the old Giants. But no one, not even Kanye Worst, has control of the Internet. Every Giant has a lifespan, and the creaking skeletons of Hollywood past are empowering Artists in both music and film to give the soon-to-be-fossils the long-deserved finger.

Do y’all realize how advertising and viewing content has been completely disrupted by freedom to choose what you view and when you view it? That’s right. You can turn off the Kardashians (and live longer) and watch something educational, old movies as you wish, or anything you want, literally, for better or for worse, on YouTube. Or how about Vimeo? And if you really dare, go to Gaia.com and pick something that will make your brain grow instead of growing a tumor from all the fast food and negativity you are sold on regular “programming”.

Albeit smart ads are creeping up on every browser, site and soon, toilet stall that we frequent, the fact remains the same: you have a choice. So choose wisely. Be aware. You only get one brain in this lifetime: use it or lose it.

And in the meantime, say no to any kind of “programming”. Your TV needs you way more than you need it. It’s 2016 and counting. One day, “programming” will be as outdated as smoking cigarettes on airplanes (member those days?) or lead paint. It’s just a matter of time before people start to spread the word about how bad this stuff is for you. The time is now to take control of what you are putting in your mind. Choose to expand your mind. Turn off the tube, tell your cable company that you’re not interested in their latest package of more programming and tune into the world of information out there that will help you love life to the fullest.

(Image not property of the Author)